The Society established the “The Dorothy Jean Petrie Penders Spirit of Scotland Award” in 2015 in honor of Mrs. Penders. Known to many as “Dundee Dorothy,” Mrs. Penders embodies the “Spirit of Scotland.” With roots in Dundee, Scotland and family here in the Unites States, Dorothy truly embodies the Spirit of Scotland so many of us celebrate today. A Founding Member of our Society, long-time Scottish Country Dancer, the force behind our Burns Nicht Supper, and leader of festival volunteers, are only a few of Dorothy’s enduring contributions to furthering Scottish heritage and culture.

This honor is awarded to an individual whose contributions in education, culture, and other achievements promote the heritage of Scotland.

The following have been award the Dorothy Penders Spirit of Scotland award. Their biographies are below. 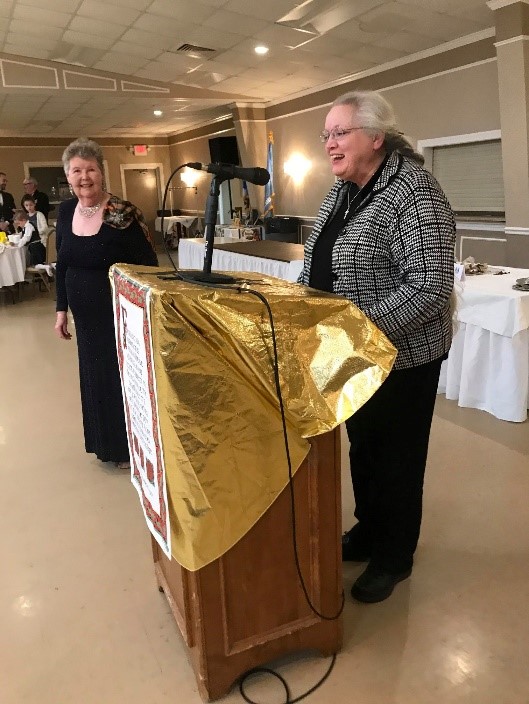 Without Valerie, there would be no Scottish Country Dancing in Frederick as she is the sole teacher in the local area and teaches every week from September to June. Her teaching style has endowed students with an appreciation of an ancient tradition, proper technique, and the pride of being a Scottish Country Dancer. Her students have come from mostly from mid-Maryland, but also from Pennsylvania and Virginia. One of Valerie’s new students is now a valuable teacher with some of the other RSCDS dance groups.

Valerie has developed dance programs and served as emcee for dances and workshops. She has attended the Thistle School of Dance every year at Banner Elk, North Carolina for 39 years getting the best new ideas from world-wide teachers who attend for her classes.

She is such a valuable member of the St. Andrew’s Society of Mid-Maryland and has coordinated the dance demonstrations for various Society events throughout the year. Scottish Country dancing has been featured at the many years of Burns Night Suppers and in the Society-sponsored Ceildhs.  Valerie has also coordinated the dance stage program that consists of many local dance groups featured at our past Celtic Festivals.

Valerie’s talents include photography and creating photo albums that preserve the history of classes, workshops, and special events. She also creates greeting cards that feature some of her photography and serve as a fundraiser for the dancing group. 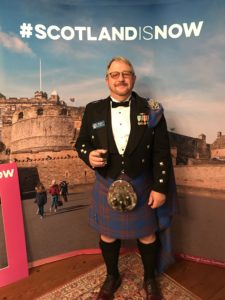 When he walks into a room wearing a kilt you know this Scot has arrived and he’s not empty-handed. He makes Haggis Puffs with Mustard-Black Currant Sauce and numerous delicious dishes. Then there are his drinks. He’ll make you a Scottish based drink starting with Early Gray tea. His appearance, his food, his drinks are just a few ways Bill Elliott influences many when promoting Scottish heritage.

His involvement with the Saint Andrew’s Society of Mid Maryland (SASMM) began in 2009 as a volunteer for the Festival, soon he became the Web-Master for both our Society and our Festival. In 2015 he was the Festival Treasurer. In between, he’s handled ticket sales, admissions gate, alcohol/whisky tastings, and helping with Logistics. Bill worked tirelessly at our Festival and works tirelessly for our Society.

Bill’s presence is noted at every SASMM event. From the Kirkins, the traveling tent at numerous festivals, Celtic Nights at The Keys, In the Street, Scottish Christmas Walk, Kris Kringle Parade, Leprechaun Luas, and here at Burns. Pictures at these events are captured by Bill and posted to our website. Bill has taken a few Scottish dance lessons and he can shake a leg. He’s always participating in a dance at a Ceilidh or at Burns. In the past and even today, Bill has given Burns’ toasts, and the Immortal Memory.

Bill often shares with us his involvement with Scottish American Military Society Post #2, Post of the Potomac (SAMS) on Facebook. He is the Bugler, playing taps at the wreath laying at seven memorials in Washington, DC on Memorial Day. He repeats this role at Wreaths Across America in Baltimore and other veteran events. Bill represents SAMS at numerous Quilts of Valor ® awards ceremonies, thus honoring service members and veterans. Bill lives by the motto ‘veterans serving veterans’. In addition to Facebook, you can see Bill’s picture in the inaugural QOVF book 50 State Salute.

That’s just half of what Bill does to promote Scottish culture. Did you know he once held the title of Secretary, then First Vice President of Clan Elliot Society, USA? He is now the President! He attends all the AGMs and the 2009 International Gathering in Scotland. The other initiatives he’s taken on for Clan Elliot include membership, genealogy, and their website.

Bill is well-versed in Elliot history. His knowledge extends to include Border Reiver history. Bill can dress as a Border Reiver or dress his dummy as a Border Reiver. Ask him how he travels with his dummy and the number of times a Cop has pulled him over. Bill’s sense of humor comes thru when he dismantles his dummy, places him in his vehicle, and the fella’s legs are sticking straight up in the air. Picture that driving down the road.

Not only does Bill put a lot of miles on the road, he is often in the air. Bill was invited to the British Embassy for a reception sponsored by VisitScotland and United Airlines. It was time to mark the new “Capital to Capital” route, a first from Washington, DC to Edinburgh direct flights. Bill quickly realized he was the only non-Travel Agent in the room. One must wonder if a quick search of United’s data base showed Bill’s many trips and his frequent flyer miles added up to the coveted invitation.

It is with great honor we select William C. Elliott as our 2019 Spirit of Scotland honoree. 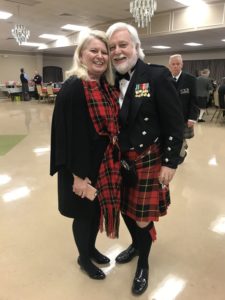 For too many to count years Ralph has been an avid and enthusiastic supporter of all things Scottish; he celebrates Scottish life and culture every day—a true Scotsman. He is a wonderful Ambassador and brings folks together to enjoy what it means to be Scottish (or a Scottish wanna-to-be): from ceilidh dancing to wee drams to folklore and songs, and more. He shares his extensive knowledge of history, whisky, and Scottish ways and customs. Ralph’s enthusiasm is contagious—one cannot help wanting to be a Scotsman, don a kilt, and get involved in a Scottish society or event.

As a member of Clan Wallace, Ralph has long served his Clan in various leadership positions. The Wallace Clan tent is ever-present at Maryland and Virginia festivals and games and Ralph can be seen recruiting fellow Clansmen and demonstrating the Claymore to children of all ages. Cries of “Freedom”—reminiscent of William Wallace as well as the movie Braveheart can sometimes be heard as Ralph explains Clan Wallace and Scottish history.

Ralph is a member of several St. Andrew’s Societies, including ours, and has been a staunch supporter of many of our events; in particular our Burns Supper and our Celtic Festival. He has been instrumental in such innovations as the first Wounded Warrior division in the Highland games run by Mid-Atlantic Scottish Athletics (MASA) and the inaugural SASMM Patron Package for our festival. Ralph stepped up to Co-Chair the 2016 festival when the festival was in need of leadership. He designed the festival logo based on our Armorial Bearings to reflect our new name of “Mid-Maryland Celtic Festival.” Lastly, Ralph has been one of the most generous financial Sponsors of our festival for several years.

The Scottish American Military Society (SAMS), one of our partner organizations, has flourished under Ralph’s leadership. Serving as at the ‘local’ level as the Commander, Post 2 “Post of the Potomac;” at the Regional level as the Commander, Mid-Atlantic “Born Fighting;” and at the National level as a Councilor at Large, Ralph has brought recognition and remembrance to Scottish veterans and military service members. Ralph embodies a veteran’s call to duty and the lives by the motto of ‘veterans serving veterans.’

Ralph has been an active participant in Council of Scottish Clans & Associates (COSCA), offering his enthusiasm and experience to help COSCA to expand the US outreach and education efforts. He has also worked to expand education and participation of the Scottish Diaspora (which consists of Scottish people who emigrated from Scotland and their descendants) and the Standing Council of Scottish Chiefs. He has used his experience to assist Scotland to increase educational outreach to Scottish descendents around the world and increase Scottish tourism, including trip to Scotland.

The influence Ralph has had on celebrating and promoting Scottish life and heritage cannot be measured, but it is felt by many and it is heartfelt.

An exceptional Drum Major who has influenced thousands of pipers and drummers.  His portrait graces numerous Celtic festival program covers, magazines, and websites. He was instrumental in creating the Eastern United States Pipe Band Association on training new drum majors. He has effectively created the standard for the East coast which is respected worldwide. Although retired from the MacMillan Pipe Bands after 50 years of service, David is still actively engaged in many of their events. He has been the Drum Major for our festival for many years and now serves as the Pipe Band Coordinator bringing many new ideas to the festival and the program. He is also active in the Scottish American Military Society and other Scottish groups. 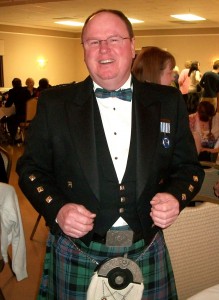 Joe’s contributions to, and leadership within numerous organizations, clearly demonstrate his qualifications for the award.

At the local level, Joe’s vision and leadership have been key to the success of the Society. After serving in a number of leadership roles, he became the president in 2012, facing a shrinking membership, a defunct Festival, and dwindling Society activities.

Joe successfully revitalized the Society by bringing together newly-recruited leadership and the still enthusiastic but overburdened leaders, expanding activities (including a Celtic Night at the Frederick Keys), and successfully increasing membership from less than 80 active members to over 100 members.

In an era where dozens of Highland Games are disappearing each year, Joe’s seemingly tireless efforts and sheer willpower resurrected the defunct Frederick Celtic Festival at a new venue in 2012  and it has grown almost exponentially each year with innovations such as the first Mid-Atlantic Scottish Athletics (MASA) sponsored Wounded Warrior class.

Joe established this very award that he is now receiving, understanding the importance of recognizing those individuals, such as himself, who often spend otherwise thankless hours over many years promoting Scottish culture.

At the National level, Joe has been an active participant in Council of Scottish Clans & Associates (COSCA) and in the Association of Scottish Games and Festivals (ASGF) and has long served in various leadership positions in the Armstrong Clan Society, including the role of President.

Finally, at the International level, Joe has worked tirelessly (most recently on a joint COSCA/Standing Council of Scottish Chiefs working group) to expand education and participation of the Scottish Diaspora (which consists of Scottish people who emigrated from Scotland and their descendants) by using his experience in the numerous organization to assist Scotland to increase educational outreach to Scottish descendants around the world and promote Scottish tourism. 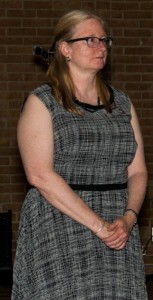 Lisa has played tenor and bass drums in pipe bands since 1972 and has been the Director of the Rockville High School Pipe Band since 1995. Her dedication to teaching has touched hundreds of students. Lisa has developed a line of tenor drumsticks, recorded an instructional video for beginning tenor drumming, and created unique symbols for tenor drummer’s written music.

Drumming with different Pipe Bands Lisa’s talent has captured those bands prestigious award such first place in Scotland at Bridge of Allen, Perth, and Dunfermline competitions; Best Drum Corps in North America; and second place at the World Championships.