While many of you have participated in past Parades,
it is important that you read this information.

Welcome to the Ballyshaners St. Patrick’s Day Parade in Old Town Alexandria. Congratulations on being selected to participate in this great event!

On Saturday March 7, 2015, the Ballyshaners, Inc., with the cooperation of the City of Alexandria, Virginia, will stage the 34th annual Ballyshaners St. Patrick’s Day Parade, commencing at 12:30 PM. The Grand Marshal for 2015 is Laureen O’Neill-James, owner of the O’Neill James School of Irish Dance.

The Ballyshaners have sole control over the content, format, and operation of the Parade. The Ballyshaners appoint a Parade Captain who has complete operational control of the Parade. As such, participation by any unit in the Parade is at the discretion of the Parade Captain. While we hope that everyone enjoys themselves, we must stress that all participants in the Parade will be held to certain standards of conduct as explained in this document. Participation on Parade day indicates the director/leader has read and will comply with these instructions. Unit directors/leaders are responsible for the compliance of their unit members.
1. Parade Formation: The Parade route extends eastward along King Street, from Alfred Street to the corner of Lee and Cameron Streets. (Exhibit A-Parade Route). All Parade units will form in the Staging Area (Exhibit B-Staging Area).

1. Dignitaries: Dignitaries shall arrive at the Car Show location on N. Pitt St. between Cameron and King Streets by 11:30 A.M. to insure they are matched with a vehicle. At approximately 11:45 AM, the Dignitaries will be transported by classic car to the staging area for the Pre Parade Procession of the Grand Marshal and Dignitaries.

2. Dignitary Cars: North Pitt Street between Cameron and King Streets will be closed to traffic for the automobile competition and staging of the escort vehicles. The Car Show Coordinator will direct the placement of the vehicles according to the Order of March. The vehicles will move to the staging point for the Pre-Parade Procession of the Grand Marshal and Dignitaries at 11:45 AM

3. Parade Divisions: The Parade is separated into seven divisions:

4. Special Notice to Units: The Ballyshaners, Inc., is a non-profit, tax-exempt (501(c) 3), noncommercial, non-sectarian, and nonpartisan corporation organized and operated exclusively for charitable and educational purposes. In keeping with these principles:

No unit or individual therein will be permitted to display or wear any sign or emblem that may be considered controversial in nature or not in the spirit and intent of the St. Patrick’s Day celebration. Nor will any unit be allowed in the Parade with members that are in violation of any laws regarding public behavior such as the drinking of alcoholic beverages in public, public intoxication, or disorderly or abusive behavior. This will be at the sole discretion of the Ballyshaners, Inc. and the Parade Captain, and all decisions are final. Parade Marshals are authorized to eject individuals or units that do not comply with instructions. In the event that members and units asked to leave do not comply, Parade Marshals will contact the Alexandria Police Department and the Parade Captain.

All units are strongly encouraged to identify their units and any vehicles that accompany them with banners and/or signs. This aids in the staging, starting, and management of the Parade, as well as the judging of units. Any marching unit; e.g., bands, drill teams, majorettes, dance groups, etc., with vehicles must identify the vehicles as part of their unit. Any vehicles that are not an integral part of a unit’s performance and are not identified with a banner or sign will not be allowed to participate in the parade. This is necessary to ensure that we keep the Parade within the time limits and produce a professional-looking Parade that is easy for the audience to follow along with. We appreciate your helping us to meet these goals.

5. Parade Safety: No unit or individual (with the exception of the Military District of Washington or official law enforcement units) will be permitted to participate while carrying loaded weapons.

2. Unit Arrival: To prevent congestion along all streets traversing the Parade route, units must arrive in the Staging Area no earlier than 11:00 AM and no later than 11:45 AM. Upon arrival, each unit will notify their Division Marshal of their attendance so that the Division Marshal can notify the Parade Captain of any units that are not in attendance. Each unit should be complete and in position by 11:45 AM.

See Exhibits B Staging Area and C Routes for Transportation for exact staging location of each division. Alexandria Transportation Department will place barricades across intersections in the staging area by 11:30 a.m.
If you do arrive in the area prior to 11:00 a.m., do not attempt to enter the Staging Area or Parade Route. Single vehicles may park anywhere on a city street that is a legal parking spot. (See Exhibit A Parade Route for a listing of parking garages.) Parade Day is not a holiday and all parking rules including meters are in effect. For large groups wishing to stay together, some alternatives for temporary parking/waiting prior to the Parade are:

2. Staging Area Movement: The Parade Divisions will move out of their Staging Area in order as the Parade proceeds. We realize that it may feel like a long time to wait in the staging area. Between 12:15 PM and whatever time the unit crosses the Starting Line, members of the unit may move around, etc., but please be ready to move up or start at a moment’s notice.

3. Individual Unit Movement: Parade units will move through the Parade Start Point at King and Alfred Streets to the Parade End Point at Lee and Cameron Streets. The Parade Route is 11 blocks or approximately .6 miles.

i. Spacing: Generally, units will maintain an interval between units of not less than 25 yards and not greater than 50 yards within each Division. However, units may be asked to move closer together or farther apart depending on the circumstances. All units will follow the directions of the Parade Marshals or be asked to leave.

ii. Pace: Units should proceed at a normal adult walking pace. To assist you, all Divisions are led by a bagpipe band. These veterans of Parade marching will set the pace for your Division.

iii. Units that cannot keep up the pace and endanger the Parade’s orderly and planned progress may be directed to leave the Parade.

iv. Special Maneuvers and Demonstrations: Units will not stop their forward movement to perform for spectators along the Parade route or at the Reviewing Stand—unless otherwise coordinated with the accompanying Parade Marshal or instructed specifically by the Parade Chairman at the main Reviewing Stand. Judging of the competing units will be done along the Parade route. Units must be prepared at all times to maintain the pace of the Parade. Units that do not comply may be asked to leave the Parade and will not be invited back.

v. Distribution of Materials: All units are allowed and encouraged to distribute appropriate materials related to their unit. However, materials must be handed directly to spectators along the Parade route.

No unit or individual therein will be permitted to throw or toss any type of item to the crowds along the Parade route. Thrown items can injure spectators and entice children to run onto the Parade route. Any unit throwing items will be asked to leave the Parade and not invited back.

Units on Foot and Floats: At the end of the Parade, all marchers and floats will turn LEFT into the Dispersal Area on Cameron Street and CONTINUE moving until they reach N. Fairfax Street. (Exhibit A-Parade Route.) It is very important that units obey the instructions of the Parade Marshals in the Dispersal Area. It is vital that finished units do not block the progress of the active Parade.

Motorized units: Vehicles should exit the Parade at the end point, going either North (straight) on Lee Street, or East (right) onto Cameron Street, and then right on Union Street and right on Duke Street.

Units will not be allowed to continue West up Cameron Street. The businesses in this block have been extremely sensitive to the perceived blocking of their shops by Parade participants in the past. We are asking all Parade participants to avoid using this block—thank you for your cooperation. Any units that need to return to the reviewing stand area can make a left turn from Cameron Street onto North Royal Street.

5. Coordinating Instructions: Units will coordinate with their assigned Parade Marshals.

1. First Aid and Evacuation: The Alexandria Fire Department Rescue Squad will provide a unit in the Escort and Dignitary Division of the Parade. This unit will be located on the 100 block of South Royal Street after completing the Parade route.

3. Sanitary Stations: There are public restrooms along the Parade route. (See Exhibit A-Parade Route for locations.) Parade participants should try to avoid using local area establishments and should use the facilities provided by the City.

5. Awards: Awards will be given in selected categories. Judging of the competing units will be done along the entire Parade route—unit should not perform exclusively for the Reviewing Stand. Award decisions are not finalized on Parade day. The Parade Committee meets after Parade day to review information gathered by the Judges, Parade Marshals, and members of The Ballyshaners, Inc. Once the decisions are finalized, information on awards will be made available on our website at www.Ballyshaners.org. 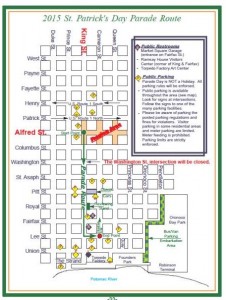 • Prince and Princess Streets will remain open to traffic. Parade Marshals will ensure that the flow of traffic is unimpeded.

• Cars or bus units will not stop to discharge passengers along these streets. 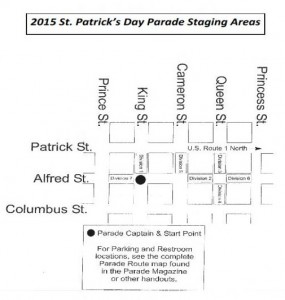 All parade participants are encouraged use METRO and the DASH mass transportation systems. The METRO station at King Street is near the Staging Area for the Parade and is extremely convenient. You can contact METRO for schedule information at 202-637-7000 or on the web at http://www.wmata.com. DASH stops are located throughout the Old Town Area, especially along King Street. You can contact DASH at 703 838 3800 or on the web at http://www.dashbus.com.

In the event that mass transit is not practical, we offer the following advice on driving to the Parade. (Please note: If your vehicle will not be in the Parade, then you will have to drop off the Parade participants or park and walk to the staging areas. Only vehicles that are integral to a unit’s performance and are marked as part of that unit will be allowed in the Parade. There is no dedicated parking area for Parade participants in the Staging Area at the beginning of the Parade.) See Exhibit A-Parade Route for parking areas at the end of the Parade route.

A. Approaching the Staging Area: All transportation units should approach the staging area from one of the following major traffic routes: Duke Street/Route 236-Eastbound, U.S. Route 1-Northbound or Southbound, or Washington Street-Southbound. (Washington Street Northbound is not recommended because of the restrictions on left turns.)

Due to anticipated congestion in the vicinity at the Masonic Memorial (King Street and Russell Road) and the Metro Station (King Street and Diagonal Road), units should avoid approaching the staging area via King Street (Route 7).

B. Departing the Staging Area: Unit transportation departing the staging area should proceed via Duke or King Street Eastbound to Union Street turning left (North) on Union Street to the Bus/Van Parking Embarkation Area at Founder’s Park. Once the Parade Route has been closed, King Street can no longer be used.

a. Unit transportation departing for West, South, and East destinations:

i. Southbound on Union Street past the Parade Route.
ii. Turn right on Duke Street Westbound.
iii. Turn Left on Patrick Street/U.S. Route 1 South.
iv. If you wish to take Route 1 South continue straightBfor all other routes take the exit onto Interstate 95/495.
v. Eastbound units should take the left fork of the ramp toward Baltimore.
vi. South and Westbound units should take the right fork of the ramp toward Richmond.